The Joy of Chipmunks & Flowered Skirts

Some of my little feathered friends have no concept of neatness. As their tubular feeder is above the porch rail, and contains small, black oil sunflower seeds, routinely they will litter the floor with empty hulls, and whole seeds. It's the scattering of whole seeds that causes this tale of joy.

While sitting on the porch glider, I caught sight of a chipmunk by the bottom step. My thought was that she'd run around the edge of the porch and climb up to the feeder to gobble some goodies. Wrong! To my amazement she came up on the ledge, and followed it around to the feeder. The chipmunk made no attempt to enter the feeder, but ate the dropped sunflower seeds that lay on the ledge. I wondered what she'd do when she finished dining. I didn't have long to find out.

If any of you readers are or were "city kids," like myself, you can relate to the electrifying thrill I had when this small chipmunk passed within four feet of my bare toes. I must confess I was a bit afraid because this was as close as any wild, furry creature has gotten to me, without a fence or handler between it and myself.

During all of this, I maintained my locked-in-place Marine Corps position. My eyes tracked the little animal, but my body was rigid. She, in turn, used all available cover to hide from the world. After the little chipmunk scrambled down the front steps, she was gone in a flash. This ended my encounter with a very special small creature. I hope she'll return, bold and often.

Around my house I wear skirts. I find them very comfortable garb. One skirt I have is black with splotches of light blue. Normally the blue is not noticed, and it takes an eagle eye to see the blue flowers. However, one very small honey bee had to investigate the "flowers" until it was satisfied as to exactly what they were or weren't. 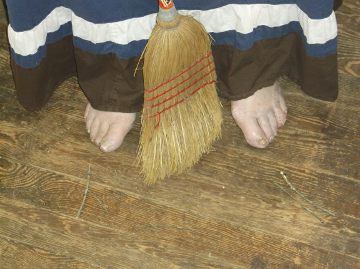 As I do every day and sometimes twice a day, I sweep the deck of sunflower seed hulls. A few days ago, while doing so, I noticed a crazy acting honey bee. If I moved the broom left, it would buzz to the right. Just the opposite when I reversed the broom's direction. My first thought was somehow the bee had become attached to the broom handle, and I was causing its erratic movement. My second thought was to simply stand still to see what the little insect wanted. I knew if I posed no threat to the bee, it would not sting me. While I watched in amazement, the bee zeroed in on the center of one of the skirt's printed flowers. Then satisfying itself that the "flower" was of no use, the honey bee went on its way.

During the times I've visited butterfly exhibits, I've seen many butterflies land on brightly colored objects. This is true of any garment with a floral print. This is especially true of men's "Hawaiian shirts." Flutterbys, an old time word for butterflies, are attracted to bright colors, especially if they look like flowers, Is it any stretch of the imagination for a honey bee to investigate a printed blue flower on a black background?