Her name is Zazzybelle, his is Simba and Charlie S. makes three. They are involved in a love triangle that knows no bounds and is fully embraced by all of them. This triangle is non-gay, non-inner faith, non-inner racial, but very much inner species. Zazzybelle is a middle aged human, Simba isn't quite an adult cat, and the squirrels, all named Charlie, are a mixture of juveniles, adults, males and females. Together they share the wonders of an inter-species relationship and the joy of each other.

The gathering of the triangle always takes place shortly after sunrise - in, on and around the back porch. The first to go the meeting is Simba. When Zazzybelle's uncle enters the kitchen, be it 4:30 or 6:00 a.m. Simba will be waiting for him. In order to insure the door to the back porch is opened immediately, Simba will practice his early morning lung power. Not just once or twice but continually until the hand turns the doorknob, opening the door and letting a young, very impatient cat on the porch.

Although the sun is never up at 4:30 and may not actually rise for four more hours in the dead of winter, makes not a bit of difference to Simba. He's out on the porch and will quietly wait for the sun to rise and everyone else to show up.

Around 30 minutes after dawn, a single squirrel will slowly steal toward the feeding area in front of the porch. Soon he's joined by a minimum of twenty clan members. Simba will sit up to make his presence known. With tail swishing back and forth, he will greet each squirrel with a tiny nod of his head. The squirrels in turn will mount the bottom step in twos and threes and return his "good morning" with an upheld wave of their bushy tails. Then everyone settles down and waits for the appearance of Zazzybelle.

If it were possible, when Zazzybelle steps on to the back porch, the entire neighborhood would be woken by the cheering chorus of squirrels and a couple of chipmunks. This would have been followed by an ever increasing din of voices requesting nourishment. What neighbors would actually hear is the lady greeting the entire clan - not by name but by eye contact.

Out comes the bowl to be filled with black oil sunflower seeds. A hush falls all over the porch and yard while Zazzybelle prepares breakfast. Scooting Simba out of the way, she scatters the contents of the bowl as far as the arm can throw.

Pure bedlam takes place. During the feeding frenzy even the chipmunks join in. All of this takes place under the watchful and approving eyes of the human and the cat. For those familiar with teenagers and their ability to wolf down the food, they can easily relate to a sunrise squirrel feeding.

After the initial frenzy, calm returns to the yard. One by one the squirrels leave with fond farewells with their tails. To each of them Simba gives a tiny nod of the head, and Zazzybelle softly says, "We love you." All the squirrels move on except one.

As they stand with noses separated only by a screen, both seem to be communicating. It's Zazzybelle's opinion during this time that neither animal is aware they are different species. They are just two teenagers very much in love. Everyone who is privileged to watch this scene agrees with her. 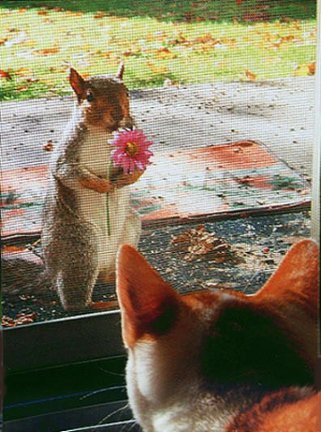 Having spent time together Simba and his sweetheart part knowing tomorrow they will be reunited. Simba watches as his darling walks away and disappears behind a tree.

Arising, Simba heads to his food dish for a spot of breakfast and a pleasant morning nap. Zazzybelle sits quietly for a little while contemplating the scene she has just witnessed. Smiling softly, she starts her day knowing regardless of what might take place later, the morning was filled with love.

That night a human, a cat and a group of squirrels sleep easily knowing in the morning the love triangle will again come together.