Poster Critters and Others

It began when the lady announced a small mouse had set up housekeeping under an old cement slab by her back door. As the woman enjoyed scattering bits of food, nuts, and baked goods to feathered and furry creatures, the addition of a mouse was welcome.

During the next five weeks, the lady later admitted, she had not seen more than the tip of the mouse's nose and its whiskers. For her, having a mouse living that close to her home was not bad, but rather enjoyable.

However, when the rodent she had pegged as a house mouse turned out to be a juvenile Norway rat, the woman radically changed her opinion. A mouse could have continued to reside by her back door, but a rat required immediate removal. Yesterday would not have been soon enough!

This started a train of thought in my mind. The beaver, squirrel, mouse, and rat are genetically "cousins" (part of the Rodentia family). Three are given good qualities, but the fourth is assigned only bad ones.

Beavers are eager (He's an eager beaver.); squirrels teach saving (You should squirrel away some food.); mice are quiet (She's as quiet as a mouse.) But rats? Rats are unclean (He's a dirty rat.); tattletales (She'll rat on you.); and odorous (I smell a rat.) 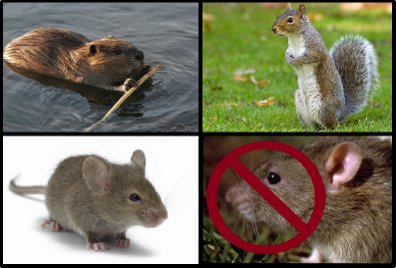 Say No to Rats!

Perhaps this is the reason the panda, Siberian tiger and manatee are poster animals, while the only time the rat's photo or likeness is used is to denote something unsavory.