How about Just Leaving It Alone?!! 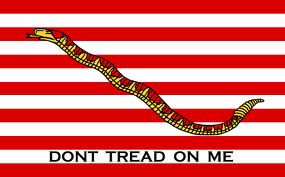 On my first field maneuvers as a young marine after we were up and dressed, waiting for chow (breakfast), one marine yelled, "Cottonmouth!" As the snake slithered through our hastily formed lines on each side of him, we watched - some with awe, some with fear, and one with an idiotic plan.

As the reptile reached the end of our lines and was headed toward parts unknown, a shout went up, "He'll make a great belt!" Within seconds, the water moccasin's life had ended.

A close examination of the snake's skin proved to its life-taker that it would be of no use to him, so it was discarded into the woods with a quick toss. The head with its mouth open, and fangs looking grimly wicked, fared only a tad bit better. It was kept on display for a fortnight, until it also was given an unceremonious heave-ho.

My family, consisting of my wife and two children, had been invited to join another family to visit Kings Mountain National Military Park in South Carolina. As the youngsters darted away to do what they do best, that is to disappear from parents, and the wives began conversing about things wives converse about, we husbands were left by ourselves to stroll along in friendly silence.

Approaching a bend on our paved path we spotted a large rat snake lying in the sunshine on a flat rock to our right. We stood in silence admiring the "Farmer's friend," (a farmer having a black snake around his barn was assured of maximum rodent control). Then, for whatever reason, the man I had been walking with picked up a hand full of pebbles and said softly, "Watch this."

Hurling the small projectiles at the serpent lying on the rock, he achieved his goal. The rat snake quickly abandoned the top of the rock and disappeared into the underbrush surrounding it.

As we resumed walking, the stone thrower expressed his delight at his aim and accuracy, while I quietly and angrily kept my disgust at his actions to myself.

Why is it when a rare opportunity is given man to view nature in the raw, rather than on film or in a controlled area, he oftentimes decides it's his duty to either destroy or disrupt it?