Oh Say Can You See? 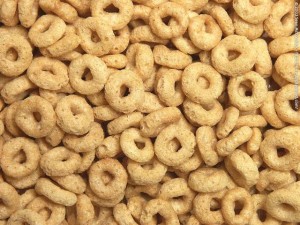 Some time ago I was given a box of Cheerios that I planned to feed to the birds. I scattered two or three handfuls on the lawn. The Mourning Doves arrived a few hours later, and while they ate them, it seemed that the whole oat donut was too large for them to easily devour. In addition, good ol' Charlie Squirrel was having a ball devouring the bird's treats. Unsatisfied, I began to ponder what could be done?

Remembering I had a pill cutter in the kitchen, I tried halving the Cheerios. This was much better, as the birds could readily gobble down my treat, while Charlie Squirrel was thwarted. However, there was a problem! It took a very long time to slice enough 'O's in half to even make a quarter cup of bird food. In addition, I needed the pill cutter in the kitchen for personal use. NUTS!

A couple of days ago, I was given a huge box of Cheerios, with instructions to feed them to the birds, or myself. I wished I could figure out an easy way to dispense the toasted Os to my feathered friends. Then it dawned on me to try a small food grinder. While the model I have has a broken handle, it does a great job breaking peanuts into 1/8" pellets. What would happen if I tried grinding Cheerios? Eureka! The Os came out exactly like the peanuts, except for a bit more dust. I made up a batch of peanuts/Os bird treats. It looked great, but how would the birds react?

Yesterday the wind blew at 24 mph with 44 mph gust. I doubted if there would bird one out and about. You cannot fathom the thrill I had counting nine Mourning Dove & two Chipping Sparrows, each gobbling down the food I had offered. Then, last night, I mixed up another batch to see what happens. This morning after it gets light out, I'll scatter some more bird food out. I wonder if I can top eleven ground feeders in the same area, at the same time. We'll see.